During Ramadan, Miriam Medhkour wakes up at 3:15 in the morning, eats breakfast, prays the dawn prayer, takes a short nap and arrives at the hospital at 6:45 AM to begin her rotation as a family medicine resident at Adventist LaGrange Hospital in Illinois.

She finishes her shift around 7 PM and goes home to bond with her two-year old daughter and prepares to break her fast with her husband, a fellow physician.

As a practicing Muslim, Medhkour abstains from eating and drinking from the break of dawn until the sun sets for the month of Ramadan. Since the Islamic calendar is based on a lunar calendar, every year Ramadan begins eleven days earlier than the previous year.

This year Ramadan, which 1.6 billion Muslims around the world observe, began on June 6. The daily fast usually lasts around 17 hours, depending on location. Many Muslim physicians feel fatigued during Ramadan because of long and demanding hours along with lack of sleep and shortage of caffeine.

“Lack of sleep can be a challenging aspect of Ramadan since I have to usually be up early for my rotations,” Medhkour said. “Another challenge I have is fatigue as the day progresses. When I am busier at work I feel the time goes by more quickly, but during down time I feel more tired at times as the day feels longer.”

“I get fatigued by the afternoon and thirsty more than anything,” he said. “This makes sense as the brain uses glucose first before any other organ in the body. It is very selfish in this regard. [I] get migraines late in the day as well.”

Ahmed said that despite the challenges, fasting has many benefits, especially if you eat food high in energy for suhoor (breakfast before dawn).

“Cognitive eating means knowing what you are eating and why. There should be enjoyment but also some rationale for the foods that you are eating. The health benefits of eating right are well known: prevents obesity, diabetes, high blood pressure, high cholesterol, decrease heart disease or risk of stroke. Some may argue [that there is] improvement in brain processes; even at the cellular level the reactions will be efficient with a balanced diet,” he said.

During Ramadan, Muslims are encouraged to give charity and perform extra prayers. Ahmed said that meditation, which in Islam comes in the form of prayers or reading the Quran has many benefits, such as neuroelasticity and neurogensis.

Aspiring and new physicians should not be discouraged from partaking in Ramadan, although it may be challenging at first, Medhkour said. “The first day will likely be very hard, but as the day progresses, you will get used to it and your body will adjust,” she said. “It is important to always drink plenty of water when you can during suhoor and iftar [breaking of the fast] so as to keep yourself well hydrated.”

Caffeine withdrawal is a difficult aspect to fasting during Ramadan, Medhkour said. “Some people try to slowly cut down on caffeine before Ramadan starts. I personally just drink my usual diet coke up until Ramadan,” she said. “During Ramadan it may be helpful to drink some caffeine during iftar for those who get the caffeine headaches, or sometimes during suhoor if you have to be up for work that early anyway.”

Medhkour recommends napping or laying down in the call room if she’s not busy, to help with energy levels. Besides reading more Quran and praying more during the month of Ramadan, setting aside family time is crucial.

“Make sure you make time for your family as well, for there is so much bonding that happens in this beautiful month, even if it is just once a week,” she said. 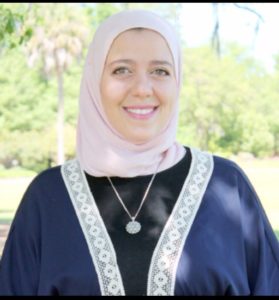 Aya Khalil is a freelance journalist, educator and blogger. She holds a master’s degree in education. She lives with her physician husband and two children, ages one and three. You can follow her on Twitter: @ayakhalil