While my husband was in residency, we always talked about the future and what life would be like after those hellish three years were over. We expected it to be perfect: three kids, picket fence, SUV, vacationing, you get the picture. And then, life happened…unexpectedly.

We had our first son at the beginning of my husband’s first year in residency. Timing wasn’t the best, but we made it work. During his third and final year of residency, we found out we were adding another boy to our family. We anticipated his arrival in June, the last month of residency and another reason to celebrate. We couldn’t have been happier! On June 1, 2012, we welcomed a nine-pound baby boy named Anthony Joseph. He was beautiful and perfect in every way, or so we thought.

After a few days at home, Anthony began sleeping through the night. I was so relieved that I finally had a good sleeper. At the time, my two-year-old son Andrew still wouldn’t sleep through the night, so you can imagine my excitement. One afternoon while my husband was post-call, he was playing with Tony. Staring at the baby’s feet, he had a concerned look upon his face. I didn’t think much of it, but then he asked me, “How long have his feet been puffy?” Honestly, I thought it was normal for a chubby little nine-pound baby. He looked at me and said, “We need to take him to the doctor, now.” His sense of urgency had me worried. He immediately called his attending and a few of our other physician friends. I thought it was just reflux, or something else minor. After all, he had cleared all of his newborn screenings to come home from the hospital just a few days ago.

We went to see his attending, who was also Tony’s doctor, and he recommended we go to the local children’s ER immediately. Upon arrival, we were immediately sent to the exam rooms, one of the benefits of having a husband that completed his pediatric rotations at the hospital. The ER physician examined him and thought it was reflux just like the rest of us. I was relieved when he told me all about his son that had it when he was an infant, that it wasn’t anything too concerning and that we might just need to switch formula. He then suggested that we do a chest x-ray just to double check. It sounded good to me, and I was ready to get it over with so we could go pick up some new formula and get home.

I couldn’t stand the thought of him being alone, so we decided it was best for me to go with Tony to the x-ray room. If you have never seen an infant x-rayed for the first time, it can be pretty traumatic. It hurt to watch him in so much pain and discomfort. Little did I know, this would be an easy thing for him compared to what was to come. As I waited, an elderly physician walked into the room and didn’t even acknowledge me. He walked over, looked at the x-ray and casually said to me, “he is in heart failure.” I felt like someone had punched me in the stomach,

Though my husband and I were still shell-shocked at the news, we had to make a quick decision. Tony needed to be transferred to a bigger center with Pediatric Cardiology. We sat and waited for the paramedics to come and transport us, while trying to arrange care for our other son. Without family close by, it wasn’t easy. I couldn’t eat or drink, all I could do was cry and try to remind myself to breathe. While waiting for the paramedics, all I could think was what I did wrong, what I ate. The self-blame had already started. When the paramedics arrived they explained to us that his heart might stop during the ride there. Another punch to the gut. My husband drove the car behind the ambulance while I rode with Tony. The drive should have only been 45 minutes, which maybe it was, but to me it felt like an eternity.

All I could do was stare at Tony, bundled up and strapped to a cot in his car seat. How could this be happening to our family? The paramedics tried making small talk with me, and I can’t recall a word of the conversation. I kept looking through the small back window of the ambulance at my husband. I had never seen him cry before…until now. As a doctor with a sick child, he knew too much. Years later, he confessed that before we even took Tony to the ER, he knew it was heart failure.

My husband was used to being in control, especially when it came to a medical situation. Here, we were helpless. Upon arrival, we were directly admitted to the Pediatric Thoracic Cardiac Unit. We walked into a large open room with about seven babies, all hooked up to lines and machines. I was in shock; I had never seen anything like this before. Tony was diagnosed with Coarctation of the Aorta and would require surgery in order to survive, as his case was severe. We were assigned to a Cardiology Fellow who happened to share my hometown in Ohio and had a daughter a week older than Tony. I think he took special interest in him because of that. We had to wait a week until they could perform heart surgery on him, because he was too small and needed to grow. Again, time stood still. His beautiful little body, his soft and perfect skin were now going to be cut open and scarred by a stranger. I was terrified. This isn’t how life was supposed to happen. We were supposed to be celebrating my husband, the Chief Resident, at his residency graduation next week, not sitting in a hospital watching my son fight for his life.

On June 18, 2012, Anthony officially became a Heart Baby, I became a Heart Mom, and our family a Heart Family. After a month in the hospital we came home again, to a new kind of normal, a normal that was full of doctor’s appointments and therapy, trying to get him to grow and stay healthy. Tony wouldn’t have to go back to Cardiology for a year, and wouldn’t need any further intervention. The nightmare was over! He was healed! My husband started his first “real” doctor job after residency. I was back to taking care of the boys, going to the gym, gardening and enjoying hobbies. We were quickly reminded that life can change in the blink of an eye.

In January of 2013, Tony was six months old and thriving. Then one night after I gave him a bath, I noticed I could see his ribs when he breathed. I called my husband into the room, and he instructed me to take him to the Children’s Hospital immediately and pack a bag for the night, just in case. The large hospital center where he had his surgery was 45 minutes away, and we decided it was best since they knew him. As a cardiac patient, he was sent directly to the exam rooms where.several residents examined him and concluded he was in heart failure. We knew there was a chance of his Coarctation returning but didn’t think it would happen so soon. Several residents and nurses asked me if he was on any medications at home and I told them no. They asked repeatedly if he was on a medicine called Lasix (which takes fluid off the body) and I said no. I would find out later that nurses and residents relied on an old chart that was never updated. We were admitted and they started him on a Lasix IV. They determined he had RSV and Pneumonia. Two days later my husband noticed the Lasix IV, and immediately asked to see an attending. The attending came and took the IV out, but unfortunately, Tony was so dehydrated that he wasn’t able to breathe on his own and had to be put on the vent. His airway was so dry that the director of the PICU had to intubate him, and remarked she hadn’t seen a drier airway in 30 years. We were lucky he was alive at this point.

Tony spent 92 days in the PICU, 28 of those on the vent. During this time he had two chest x-rays a day, as well as several echocardiograms. During one echo, two more heart defects were discovered, ASD and Mitral Valve Regurgitation. His new diagnoses were called Shones Complex and the hope of him being cured quickly went away. After much research I have found that there never truly is a cure for CHD, it’s always lurking in the background. We were told to wait until he goes into heart failure for his next surgery to happen, since the bigger he is the better the results. The daunting drive of 75 miles one way was just too much. While my husband was working in Family Medicine and OB, his schedule was insane and we had no one to help us. We decided as a family to relocate to be closer to the medical center where Tony receives his treatment.

Fast forward to 2016, Tony is now three and half years old. The road has been a long and hard one, and I know that it’s far from over. Since he was born, he has been diagnosed as having behavioral issues, hearing impaired, a rare genetic disorder and speech and language delays. He is small for his size but mighty in his heart. He truly is a fighter. At the end of 2015, we were granted a Make-A-Wish trip to Disney World. It was beautiful, yet heartbreaking at the same time. Shifting from being a physician family and always helping others to being the ones in need is a very humbling. It’s a great thing to be granted a wish, but we also know the reality: Tony has a life threatening condition. 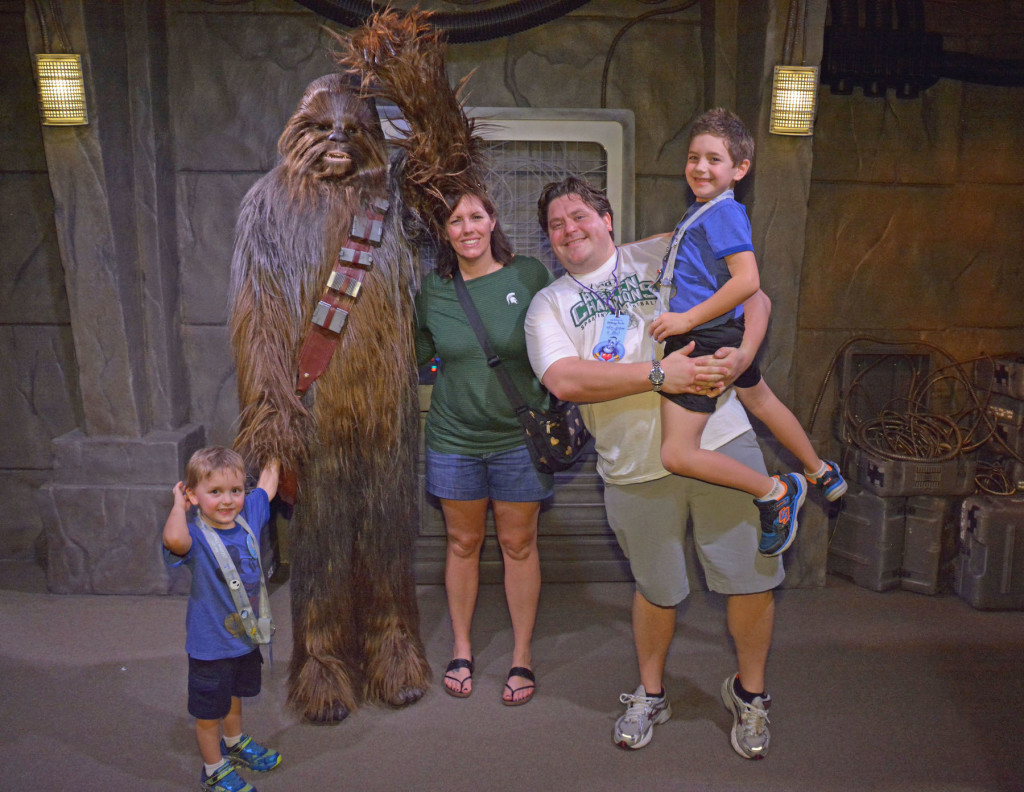 Since Tony’s birth, I have made it my mission to raise awareness for congenital heart defects. Making Pulse OX screening a mandatory law in Michigan was one of my first goals, and I am happy to say that it was implemented into a state law in Michigan on April 1, 2014. I also ran a marathon to raise funds for a local heart group and auctioned some of my photography for the hospital that saved Tony’s life.

My husband has saved our son’s life twice. Had he not been a physician, I don’t know that Tony would be with us today. Being a parent to a special needs child in addition to a physician has made him a better person and doctor. He has compassion that I have never seen before in a physician. Our family has learned to take each day one at a time and to be grateful for all that we have in life. 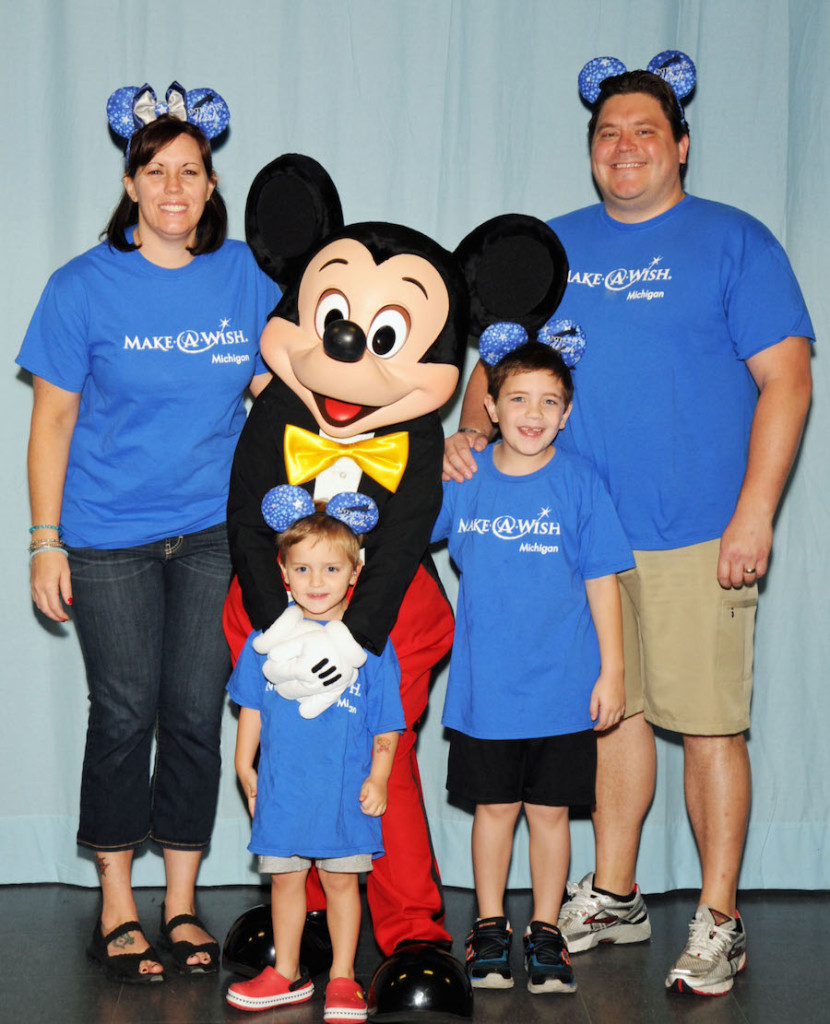 Sara and her husband Andrew reside in Jackson, Michigan with their two children, Andrew (6) and Anthony (3). Andrew practices rural medicine in Leslie, Michigan as a Family Medicine Physician. Sara is a fulltime caregiver to her son Anthony, as well as an active volunteer in the community including the local YMCA, St. Mary’s Church and several groups that focus on raising awareness and funds for Congenital Heart Disease.