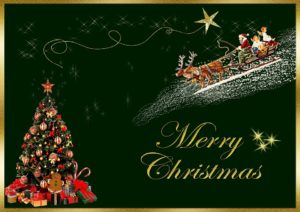 The holidays have been marketed as joyous celebrations, with visions of snowflakes, crackling fires, and familial harmony floating before our eyes. Of course, a good portion of the country won’t have snow or temperatures cool enough to put the Yule Log to work. But regardless of where we live, we all strive to set aside this time in December to bring our families together and bask in special traditions. In many families those traditions originate in shared ethnic, cultural, or faith-based understanding with slight tweaks to fit the family dynamic.

For physician families, those changes usually revolve around the call schedule of one (or both) parent(s).  This may mean celebrating on a different day or in a different way to gather the family together. Sometimes grandparents and extended family members are thrown into the mix, adding to the juggling of activities, meals, and presents. In general, though, there’s a shared vision of what the holiday season looks like and means to the family. There is also a fixed date and shared responsibilities to make the holiday happen.

But what happens when the physician family is interfaith?  In particular, how does a busy physician family balance Hanukkah with Christmas? Surprisingly, for us it has not been as difficult as I would have thought when we were first married (i.e., before kids). 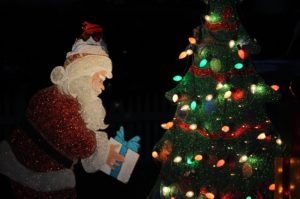 Judaism follows a lunar calendar, which does not sync with the Gregorian calendar we all use daily. Hanukkah always starts on the 25th day of Kislev, which falls primarily in December, although rarely on Christmas Eve or Christmas Day (on average, about every 15 years).  Hanukkah most commonly starts sometime during the two weeks prior to Christmas, which means the eight days are usually over before December 24. Some years the first night of Hanukkah can be as early as Thanksgiving! Basically it has the potential of making a two-day holiday into a month-long celebration.

However, with some deft planning and respect for each other’s traditions, we have been able to avoid unnecessary stress while blending the two observances. Hanukkah is actually a minor holiday for Jews but has gained significance in modern times due to the coincidence of the Christmas celebration. As a child, I received one small gift on each of the eight days after we lit the candles at sundown. 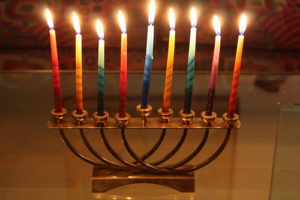 Since my husband and I realized Christmas would most likely be the dominant gifting holiday, we reduced gifts to our children to one special item at Hanukkah and the remainder on December 25. We still light the candles every night, even with both grown and flown.

I make latkes (potato pancakes) and have donuts on the first night of Hanukkah, which are traditional fried foods for the holiday. 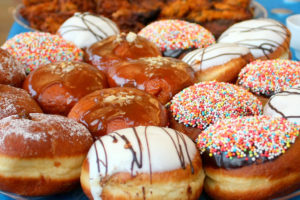 This year we will share Hanukkah with my mother-in-law and sister-in-law, neither of whom has ever been with us when both holidays coincided in the past.  I know it will be a special time to bring both sides of the family together to celebrate, respect and enjoy each other’s traditions. 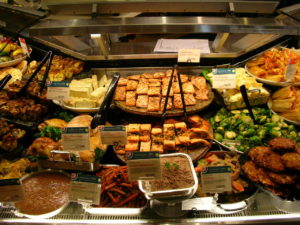 Julie Newman is a past president of the AMA Alliance, wife to cardiologist Jack and mom to adult humans Hannah and Matt, two labradoodles named Archie and Benji and two new kittens named Corky and Dexter. 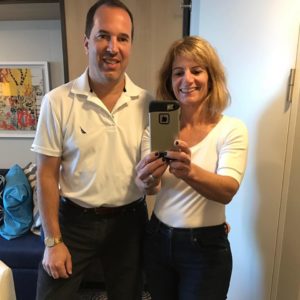 One thought on “Balancing Interfaith Holidays”